ARE YOU READY TO CHANGE THE WORLD?

Ready to begin your journey?

Feel free to look around

On Friday the 16th and Saturday the 17th  the Centro Social de Ermesinde organized some activities to celebrate the day of São Martinho, a special day of this region of Portugal when it is used to eat chestnuts with a good cup of wine. It occurs on the 11th of November and the Centro Social was about to make the celebration during that weekend but, because of the bad weather conditions, the date was finally moved to the following weekend.

And it was a SUCCESS!

On Friday, between 18.00 and 19.00, the children of the kinder garden made a fantastic show, dancing and singing. After the show they all came with their parents to taste the delicious dinner that the employees from Centro Social prepared for all. Then, on Saturday, the party started at 17.00 with a funny Zumba session in the square. Then, as the day before, a lot of people came to enjoy the dinner all together and to take advantage of the autumnal flavours coming from chestnuts and wine, as the tradition wants. 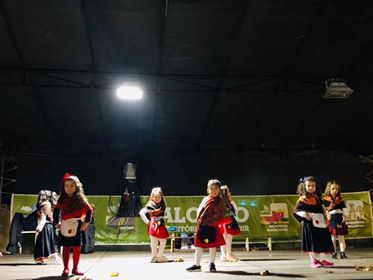 But who was São Martinho?!

Martinho de Tours was a military man, monk, bishop and Catholic saint, born in 316 and died in 397. The legend says that one day a Roman soldier named Martinho was on his way to his homeland. The weather was very cold and Martinho found a beggar who asked him for alms. Martinho cut his cloak in two and gave one half to the beggar. Suddenly the cold stopped and time warmed. This event is believed to celebrate the reward for Martin being good to the beggar.

The tradition of São Martinho Day is to bake the chestnuts and drink vinho novo, the wine produced with the newest harvest. Normally, on the eve and on Saint Martin’s Day, time improves and the sun appears, just as it did with San Martinho. This event is known as Saint Martin’s Summer (Verão de São Martinho).

In this way, São Martinho became the patron of beggars, tailors, spellers, soldiers, knights, tanners, restaurateurs and winemakers. Along the most popular proverb of this tradition, the day of São Martinho, pao, castanhas e vinho! (bread, chestnuts and wine). But why chestnuts? Because Sao Martinho is celebrated at the time of the harvest of the chestnut (made during the months of October, November and December) so they also are the main protagonists of the party. But… why on November the 11th? Because in this day Sao Martinho was buried in the French city of Tours, his native land.

Besides Portugal, also other countries celebrate this day. In France and Italy, like in Portugal, a lot of roasted chestnuts are eaten every year! In Spain, a pig is slaughtered, and in Germany bonfires are lit and processions are organized.

I would like to say something more about Italy. Here São Martinho is celebrated too, above all in the regions of Abruzzo and Veneto. It occurs in the same day, the 11th of November and it is linked to the period of the harvest too. But the celebration is not exactly the same of the one we saw in these days and there are regional differences. 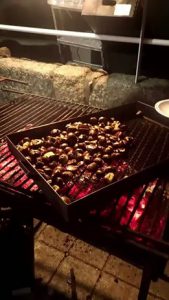 In the region of Abruzzo, for example, it is a day known as the “Processione dei Cornuti”(Procession of cuckholds), a name strictly linked to an ancient pagan festival. The tradition wants the man of the region parade in all the streets of city during the sunset. At the end of the procession the traditional spezzatino di san Martino, is served to each of the them. The day following the party continues as here, in Portugal, eating chestnuts and drinking the newest wine of the year.

In Veneto there is a procession as well. But in this case there are not men parading along the cities’ streets, but children. They usually make noise with pots, lids and spoons and they go from an house to another asking for chocolates, bonbons and sweets singing this nursery rhyme in dialect:

a trovar la so novissa.

So novissa no ghe gera,

If they receive some sweets the song continues:

On the contrary, if they receive nothing, the song continues in this way:

To make a resume, this song thanks the day of San Martino and, if children receive some sweet to eat, they thank the family, San Martino, and they are happy to continue their march with their full “sachetin”,  namely their little pouch.

Also from a culinary point of view the celebration is different. In this Italian region we use to prepare a typical cake made of pastry, covered with a very coloured frosted made of sugar, bonbons and chocolates. But, at the beginning, this wasn’t the original cake. In fact, as my grandmother who is born in this region told me, they used to cook a cake made by a jam of quinces, with a very harsh texture, modelled as a coin of 10-20 cm and which represented a draw of this saint.